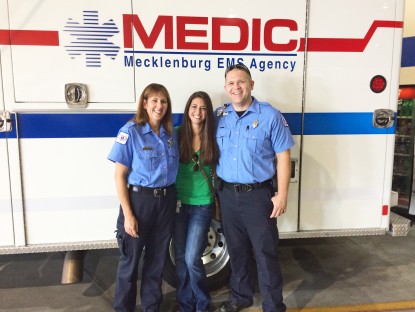 By Editorial TeamNovember 22nd, 2021No Comments

A letter from our patient. Kudos to KC Bernesser and Gabe McGaha for being fine examples of the paramedics that we have serving the community.

I am writing to you in hopes that I might be able to find information on an accident that occurred on Friday, June 19th of this year in the Steele Creek area of Charlotte, on Granite Street.  I was struck on my drivers side by a speeding vehicle.  During my unfortunate experience, I was assisted, from what I recall, by two wonderful emergency Medic response personnel.  Until now, I have been attempting to locate where this emergency response vehicle was dispatched from so that I could send my most sincere thank you’s to the two folks that helped me get through this traumatic incident.  Thankfully, I received your email from a good friend of mine, that mentioned you might be able to pass along my gratitude to the woman and gentleman on duty that morning.

It was almost immediate after the impact that the Medics arrived to my aid.  It seemed as though I was losing quite a bit of blood from multiple areas of my body, including my head, and I was feeling extremely disoriented and sick.  I was sitting at the time of their arrival after extracting myself from the passenger side of my vehicle, and was having trouble regaining sight at the time for whatever reason.  I noticed the woman’s extremely kind demeanor and soothing voice commands, and immediately felt a bit more at ease.  The gentleman that was also extraordinarily helpful and nice, and his sense of humor helped the situation in a tremendous way.

I had a terrifying past experience while being placed on a backboard and transported by ambulance to a hospital, and as discombobulated as I was, I tried to convince the Medics NOT to bring me to the hospital.  I failed… However, this “ride” was of much greater contentment surprisingly.  I would have never imagined it possible to feel so calm, and that was made possible solely by the two Medics.  The entire ambulance ride seemed long, however the two spoke to me constantly making sure I was as comfortable as all possible.  Upon arrival at CMC Main, I had hoped that the doctor’s would not have to cut off my clothing to locate where the accident had caused open wounds, and the Medics made sure to relay the message.  That might be standard protocol (and maybe a bit silly considering), but I was grateful for the attempt to spare my outfit.  The woman stayed for quite a bit it seemed, as the nurses and doctors bustled around me.  I do not remember her leaving but the next thing I knew, I was being rolled to another room in the hospital.   After lying in the room for at least an hour or more, the medics returned to check on me one last time before departing.  They both expressed some tremendous words of encouragement and went on their way.

I was so disoriented, at the time, I did not even think to get the names of the men and women that helped provide me with the care I needed to begin my recovery from the crippling accident.  I had most direct contact with the two Medics, however the gentlemen that arrived on the Charlotte fire truck, Steele Creek station should not go without acknowledgment as well.  They also had their own way of making me feel secure and not entirely alone in this matter.